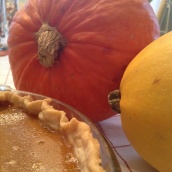 The snow is falling and the lights are blinking. Six to nine inches of snow are predicted but it’s alternating with sleet so the roads are treacherous and the lines are heavy. All I can do is keep cooking. If there is no power tomorrow, we’ll load up my old jeep with food and figure things out.
I started my pies early. The dough was mixed up yesterday so I just had to roll it out and prep the fillings. My daughter came home from college yesterday and I was happy thinking about her waking up to the smell of pies baking, in her own bed. Unfortunately, the apple pies started bubbling over onto the bottom of the oven and caught fire. Smoke poured out from the stove and the fire alarms went off, LOUDLY all over the house. I opened the doors and the dogs took off in 2 different directions, running outside towards the road. I would like to say I quickly, calmly and competently handled the situation…BIG LIE
I made a cranberry sauce with fresh cranberries and brown sugar but it was too watery and didn’t taste very good. I added a lot of blueberries that I had frozen from my garden, cider vinegar, allspice and cinnamon and cooked it down until it got thick. Now it’s delicious. The pies are kind of a funny color though.
Things rarely come out the way we expect them to. Maybe tomorrow will turn out to be the perfect ‘Norman Rockwell’ Thanksgiving! Probably not. That’s okay.

I live in an old farmhouse in New England. I have organic gardens and I do my best to keep my life clean, simple and green. For me that means making whatever I can by hand and keeping where I am a natural and safe place for my family and the creatures that share it with me. 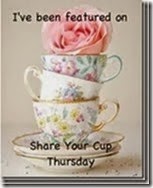 The Snail of Happiness

small steps to a kinder world

Life is a series of highs and lows. Be grateful in the highs. Be graceful in the lows. Find contentment in your Middle Ground

Story of an unique crochet art

Inspiration for a holistically healthy life.

Chronicles of a Blogaholic

Daily Reflections to Shine On

Observations & Reflections from Home & Abroad from the Side-Kick Traveller

Of A Simple Nature

A place where the simplicity of living meets nature.

This site is about my life as a farmgirl, wife, mother and grandmother. We have a beautiful 22 year old granddaughter and and the cutest 3 year old grandson. We own two farms in Craig County Virginia, leasing one and raising beef cattle on the other.

It's NEVER too Late to Live Happily Ever After

Finding pleasure in the simple things in life

Living bigger on a smaller scale in Portland, Oregon

My journey around the world

A crazy quilt of poems, stories, and humor by Catherine Hamrick

Ingredients for a Beautiful Life!

The visionary world of Nicholas Beckett

Attempting to live off the land in Michigan's Upper Peninsula

“A bit of simplicity in a world full of complexity.”

Come view the world in my loft

B Is for Blessed!